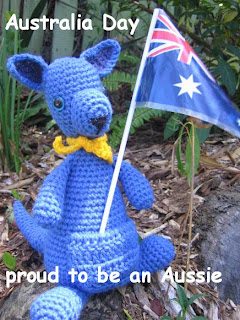 Today is Australia Day. This celebrates the arrival of the First Fleet at Sydney cove and the start of our contemporary Australian Settlement. For the indigenous Australian, this day marked the invasion of the British, the arrival of rabbits, rats, measles and the common cold.
We have come a long way in reconciliation, however more is to be done.

Last night we watched Jelena Dokic win the quarter final in the Australian Open. This was quite an Achievement for this young woman. Her life has been pretty tough as she has battled depression, financial difficulties and a father who has attracted a lot of bad press for his antics. It was her Dad who brought her to Australia in 1994 to escape the conflict in their native Yugoslavia and turn her into a tennis champion. He was then thrown out of the United States Open in 2000 after screaming obscenities. But last night she was remarkable. 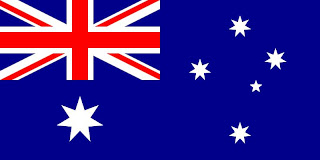 So while watching the tennis I was feeling a little patriotic and decided I would try and do an Australian Flag Tea Cosy - just for Australia Day.
How stupid of me as the Australian flag isn't the easiest thing to crochet. In fact why couldn't our flag be as simple as the Yugoslavia ( Serbian ) flag with simple stripes of red white and blue.
So here is my first attempt. 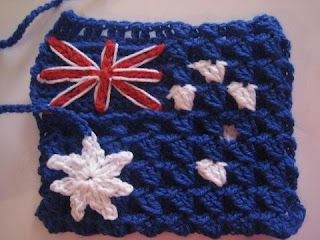 Family feedback - "the stars aren't starry enough"
" flags are supposed to be rectangular not square" .. doh but the teapot is round
"The pointer looks like the size of a meteor about to hit Ularoo" 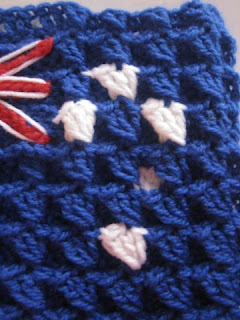 "mmm I didn't realise the Southern Cross was made of triangles, and a white space.
"You know the pointer has 7 points Mum"
Yep, I know that I counted them.. pity it looks like a wildflower.....
The points are symbolic , one for each State and 1 for the territories. I reckon a flannel flower would have been a hellava lot easier to crochet though. It could easily have 7 petals. 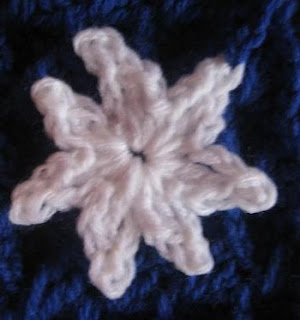 " You should have started this about 6 months ago if you wanted it finished by today...."

Yes I love having honest critique to improve my design skills ; o)
Oh well at least I got the colours right.
So this is the first side of the cosy, and I am away to see if I can make the stars starrier, the pointer a bit more pointy, and find a rectangular teapot.
As for the rest of the Day, I have baked the pavlova, and it is now cooling in the oven. We have a nice leg of lamb to roast in the Weber and a bottle of Jacobs Creek red.
I was planning to go and sweep out the barb q area as we had a bit of a storm last night. As I look out the deck though, it is starting to rain. Maybe I will just stay in side and see if I can improve on the flag instead.
I am also thinking that the Indigenous flag might have been an easier choice for my first flag attempt. 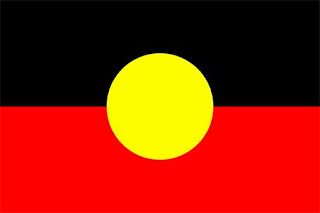 Have a happy Australia Day!

I thought the flag was pretty good. For the little stars, maybe embroider them on.

hola:
I crochet fanatica andalusia especially the amigurumis.
and I have in my collection several design as English as I am novice and more at sima speak Spanish I can not do.
but if you gave me a great idea to make my banner and I am a Chilean living in the eighth region of Bio Bio.
I congratulate you for your work and also for the country where I live and with my husband We loved going there for anything but not knowing English arepentimos us.
Congratulations on his work and his country his blog. Yanett chile adios.

i think that's a fantastic flag! bizarrely, i had the exact same idea as you at probably the same time (about a day 1/2 before au day). i ended up throwing my flag out - ur red/white flag bit came out a lot better than mine. fyi, i did individual crocheted stars to sew on and they looked ok but i could NEVER get 7 points on them. maybe next year.