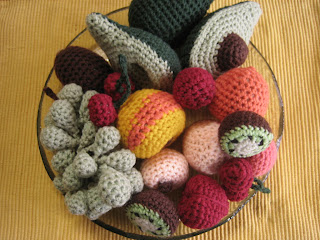 Well this fruit took me sooo long to write up an test and photograph etc if it were real it would have been rotten fruit!
I do feel a sense of accomplishment though as I started this lot before Christmas last year. The embarrassing thing is that we have come full cycle and the fruit is back in the shops.
This is what we call Christmas fruit as it adorns our tables in our Summer.
This fabulous looking avocado was worked by one of my wonderful testers. She had much better colours of green in the US than I have here in Australia. The avo is whole, as well as the two cut halves. One of my greatest kitchen fears is cutting myself when I try and remove the avocado seed. There are a heap of avocado farms not far from here so they are usually quite plentiful. 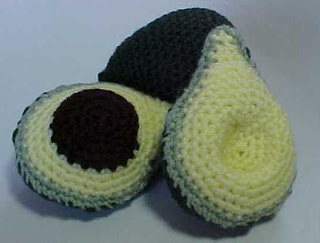 Here is the kiwi fruit - whole and cut. 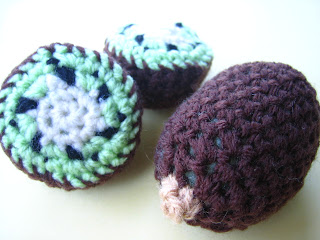 The stone fruit is particularly colourful and making these is a bit of fun. There are peaches, apricots, nectarines, plums and cherries. I am thinking that I might attach a few of these bits of fruit to the Christmas garland this year for something a bit different. I might also do a few to put in the Christmas stockings for the MIL and SILS. 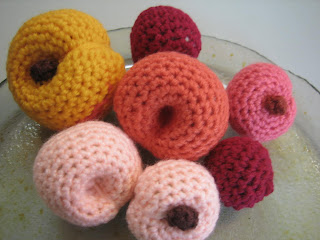 I have decided though that the grapes are a health hazard. My testers and I nearly went nutty making them. You need to have a certain level of OCD to crochet a bunch of grapes. Give me cherries any day! 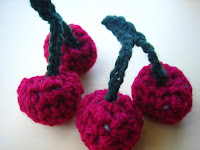 They do look good as a part of the bowl. The patterns are now on my etsy store. 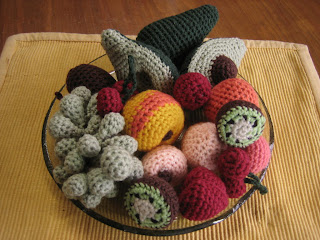 I just had to post these as now they are finished I really like them a lot. I have seen some amigurumi fruit around with faces worked on. I am a bit traditional and think that looks a bit silly, but I guess if you want faces on your fruit then you can add them.

Yep I am a show off, but these have really been one of those things that seem to have taken me forever to finalise. I think because I kept adding more fruit to the bowl. My son reckons I now need a pineapple but I am not sure I am up to it!

I am now working on some scrapbuster projects which I will put the patterns up for free when I finish them. These are quick little projects for using up odds and ends of scrap yarn. 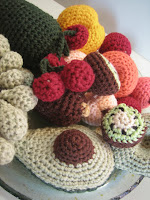 Our Summer has truly hit here and we have had stinking hot days, and wild thunder and lightening storms at night. My days of crochet will start to slow as I spend more time outdoors and around the pool. I have the snugly uglies out to test and a few Christmas projects in the wind.

please don't nick my photos. I know they are pretty but they belong to me ;o)) 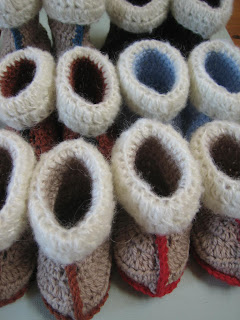 I have been thinking about ugg boots all winter. Firstly they are an Australian thing, and secondly they are so snuggly warm. I have seen crocheted cowboy boots, ice skates and converse so I figured that Aussie uggs would be the thing for me to design in crochet.

The Ugg boot is an Australian icon, and is traditionally made from 100% sheepskin and fleece. Because the real uggs are made of wool I prefer to crochet these in pure Australian wool to achieve the woolly warmth. This is a quality yarn that is grown and spun in Australia. Nothing can surpass the real thing, but these booties are a bit of fun. 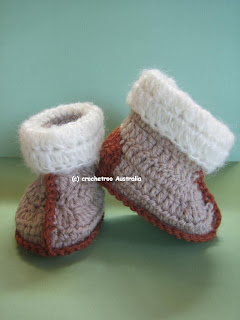 I love pure Australian wool but it doesn't come cheap, even here downunder. This is a patons natural country wool which is so beautiful to work with and deliciously soft and warm.

The picture below shows my trusty uggies which I have loved every winter for about the last 25 years!I love my uggies! This is a more classic style and the one I based my design on. Ugg slippers are basically 2 bits of sheepskin wacked together. 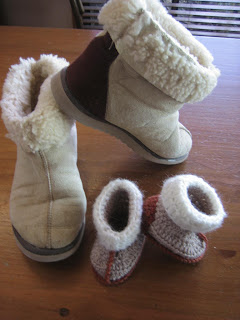 An American company recently trademarked the word “Ugg Australia”, hence restricting the use of these words by traditional Australian Ugg manufacturers. They were subsequently taken to court by a group of Australians who strenuously objected to this action.

Not only did the US company take the words "Ugg Australia", but were also having the boots made in China. Nothing too Australian about that! This caused huge uproar here as Uggs have been arround for decades. It was only when some of the Hollywood types started being seen in them did the overseas market take an interest in them. I have always owned at least one pair. I also have a pair of knee highs which I bought last year in Melbourne.

The history of the ugg boot is an interesting one.


The sensitivity of a US company trademarking the works Ugg Australia, was such that senior politicians were reported as saying "we should tell the yanks to bugger off".

It was declared that the word Ugg is a generic word in Australia referring to woolen boots and as such can’t be trademarked. Ugg boots have been around since the Second World War and were popular in the 60s and 70s for surfers. They were considered bogan until their recent raise to fame. 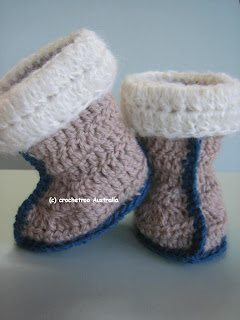 These are my original designs based on the classic Aussie Ugg. Please leave your comments on whether I should write the pattern out.

My crochet design is protected by copyright. (c) copyright crochetroo. My images are also copyrighted.

Thanks for looking.
Posted by crochetroo at Saturday, October 20, 2007 41 comments: