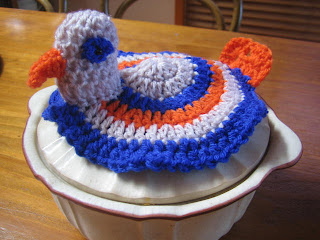 A fellow crocheter contacted me re the casserole pot toppers. She has my patterns and was keen to make these for her daughters school fair. These things are perfect for that, and this is a part of my motivation for coming up with these sort of quick and quirky projects. She mentioned that the schools mascot was a hawk, and that the colours were blue and orange.

Now we do have hawks here on the Coast, namely the pacific crested hawk; but I don't often get up close and personal so I had to do some Internet research to see what makes a hawk distinctive. 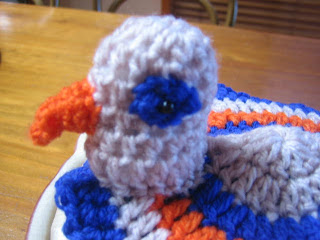 My conclusion is, it is the evil looking beak. So here is my hawk especially for knic knac, in the unlikely colours of blue and orange. It does look very colourful! Funny thing was that my son saw it and said that if I had done the beige bits white it would have been the sea gull which is his house mascot. His colours are also orange and blue.

So here you have the Hawk, in school colours which knic knack has to now go forth and multiply for the school fair. 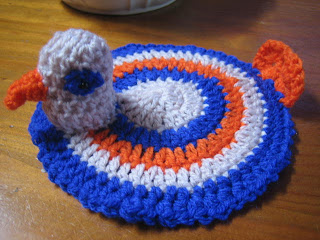 I reckon a whole bunch of them on a table would look pretty effective...

Part of her original question was whether I had a kangaroo one. I didn't, as when I designed them I was thinking of what sorts of things you would casserole. Kangaroo is not something we would cook! Particularly the protected species! I did laugh though, as the thought of Hawk casserole isn't too inviting. The other hawk, of cause that comes to mind is none other than Bob....

Thanks for looking.... I am currently working on a few other special requests which are a test of the old gray matter.

What a colourful and great looking pot topper! Love your other crocheted stuff too, very inspiring :) Have a great weekend!

No way! Our middle school-aged sons' school mascot is the hawk, too. How funny. I'll have to ask him what colors their school is... I think green and white; off the top of my head.

I just love your patterns all of them .from cathy in Florida