Meet True Blue Kangaroo. I have had a ball of 12 ply Magnum beating around the cupboard for a while and I decided to make a larger version of the Wallaby Joeys that I posted recently.

This guy is the true patriot with the flag and all. I worked True Blue up over the Australia Day weekend. 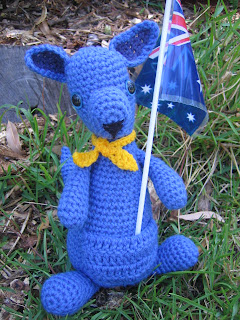 There is more to True Blue though than a ball of yarn; as there is a more meaningful yarn to be told.

The movie "The Shiralee" was released in 1957. This one starred Peter Finch and was based on the book written by Darcy Niland. the story is about a man whose wife leaves him and their child. I recently saw "In the Pursuit of Happyness" and the basic theme is very similar. A father trying very hard to raise a child and make a living through times of bad luck and hardship. The "Pursuit of Happyness" is a great movie, but I would argue that the original 1957 "The Shiralee" is pretty good viewing as well. Hard to imagine this is 50 years old now, yet the story still strikes a chord.

The word "Shiralee" means burden, and his daughter Buster is Macauly's burden as he swags across Australia trying to find work. The movie was remade in the late 80s and this time had Brian Brown as Macauly. Brown always plays a stereotypical ocker Australian.

The significance of this to the kangaroo is that in the movie the little girl Buster - has one toy, a rough looking kangaroo that she names "Gooby". Mcauley drags Buster with him as he seeks work, and Buster drags Gooby along. 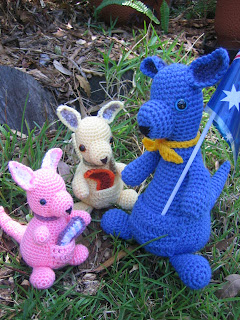 I have searched on the net and I cant find much about Gooby.

When I was a child an uncle gave me a stuffed kangaroo and I called him "Gooby". Gooby was very special. My Uncle died soon after in a car accident and I can remember the distress in my family at the time. Gooby was my childhood cuddly. Kangaroo cuddlies are great as you can lovingly strangle them by the neck, drag them around by the tail or the ear. I don't know what ever happened to my Gooby, but I can remember the smell. It was made of real kangaroo pelt. Something that we would never do now! I remember the bare patches where the fur had rubbed off over the years. I hadn't though about this much until recently.

So here I am now, many years later trying to reconstruct a Gooby in crochet. So I called this one True Blue Kangaroo cos she is True Blue with a story to tell. 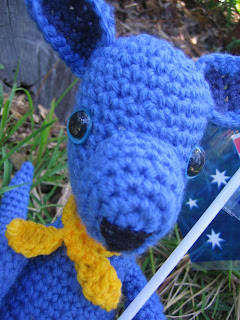 I am going to make some more for the school fete later in the year. I will make some male roos as well although having a pouch does come in handy. Did you know that only the female roo has a pouch? The males done need one as they don't have a joey to carry around.

Just a bit of trivia for you.

Thanks for looking and reading my story.

As usual, these images are protected by copyright. You may link to this page, but you may not save or transmit my photos.

So so cute! You definitely should make more this size, I love them! And great story behind it, make sure, if you sell this one or more to come, that you put that story in there... that stuff always makes handcrafted items all the more special!

beautifull works and thank you for your pattern

I love the blue roos!! All of your designs are fantastic! You have just been tagged!! Come read about it on my blog!

Hi there cupcake! I just love your aussie animals. I live in Italy but lived in Perth WA from 1970 to 1981. My parents and sisters are still living there. How I miss Australia!!
Ciao.
Rita.
http://clearblogs.com/needlesandbrushes/

I love your True Blue Roo! Hee Hee. Twelve ply must be like a bulky weight. I want to buy the kangaroo pattern soon. SOOO cute!! I love all your patterns, Cupcake! :)