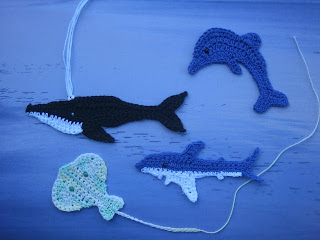 This is my latest set of bookmarks and motifs from downunder. I designed these guys mid last year and they have taken me for ever to bring to completion. I sort of got distracted by other stuff, and then Steve Irwin died so the timing for the sting ray just didn't seem right.

I have grown up by the sea, and I just love to watch the sea life. We are so lucky here because Sea world is also just down the road and they have the most amazing shark tank and water shows. The other wonderful sea life display is at the Townsville aquarium up North. They have one of those glass tubes that you walk through and the fish and sea life swim around you. this is the closest I have been to a sting ray and it was a magnificent experience. 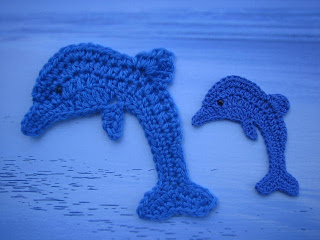 The snubfin dolphin is a separate species to other dolphins and lives off the Queensland Coast. They were only classified in 2005 and have a high conservation priority. He is different from other dolphins in that the dorsal fin is a bit smaller and the skin colour variegated. I just love watching these creatures as they leap out of the water, and frolic in the sea. The pattern for this can really be any dolphin and they work up well in both a cotton thread, as well as an 8ply yarn. I made a few of these as bookmarks and they are quick and easy. 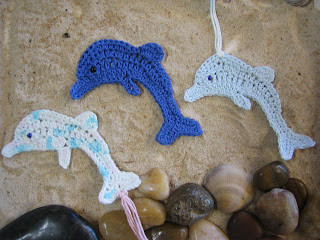 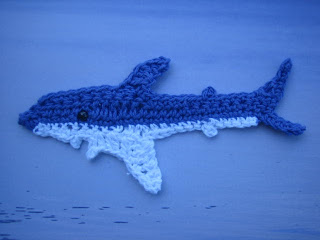 The Great White shark, also known as a pointer shark is listed as vulnerable on the endangered species list. These guys are slowly decreasing in numbers, mainly attributable to over fishing, and the practice of “finning” to make shark fin soup. They are a lonesome creature, often travelling alone, and an invaluable part of the oceanic ecosystem. They have the distinctive sharky grin with over 2,800 teeth and prey on large marine mammals such as seals, sea-lions, dolphins as well as large fish, turtles and even sea birds. This fellow often makes the news for snacking on surfers. This bloke is pretty effective as well in either a cotton thread or a heavier yarn. 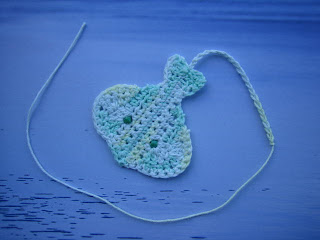 The stingray is a non aggressive bottom dweller who lives in our Great Barrier Reef. This is the creature that killed Steve Irwin; an unlikely and tragic event. The stingray is a graceful swimmer, and there are a number of species from plain colours to the spotted ray. The pattern for this is really simple and I like how the tail works as a book mark. 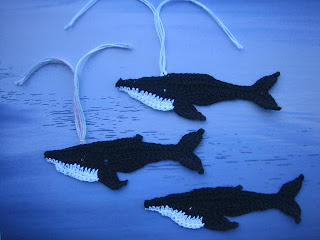 The humpback whale is seen off the Queensland Coast as they migrate south to Antarctica from the Great Barrier Reef in July. They have a distinctive hump on their back and are fascinating to watch as they leap and breach out of the ocean. Under water they sing beautiful songs. Humpbacks are on the endangered species list. Whale hunting must stop if they are to survive. They are a political animal causing much friction between Australia and the countries whose fishermen sail illegally into our seas to kill them. The humpback is my favourite of this set. I have endeavoured to be as anatomically correct as I can. Just before Christmas last year my sons and I spotted a pod of whales off the coast at Cooloongatta. I could sit for hours just waiting for one to breech or spurt. 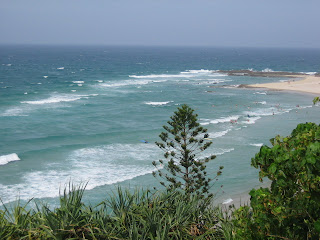 This is one of my favourite spots on the Coast. Isn't is magical?

re the Sea creatures, I have listed them on my etsy store.

Thanks for looking.
Posted by crochetroo at Wednesday, February 28, 2007

Our kids' old schools' *mascots* (?) were whales... one classroom was the narwhals, another one the orcas... This would have been a big hit there(but they don't go to that school any more...). ;) It would be a big hit with kids anywhere, though. I love the humpback whale the best. Marvelous!!

I am so jealous of how you grew up... near the ocean, sealife watching! Awesome! Then again, I guess I'm taking my own beautiful scenery for granted. Anyways, I agree with Tina, this could be a real big hit... I love the dolphin's most myself, but I love the overall idea of crocheted bookmarks & I'm going to take your butterfly pattern & make a handful of bookmarks for my bookclub lady's if that's okay!?

Its artisan works are wonderful! If it will be able to explain as to make the kangaroo, I will be very grateful…
It forgives if the English is not correct, but he is that I am Brazilian… and I searched the translation of my text in the Google… rsrsrsrs

A great one I hug…

I am so amazed by the lovely animal stuff you create

I don't see this pattern in your etsy store. Is it still possible to purchase it? Our school's mascot is the stingray.