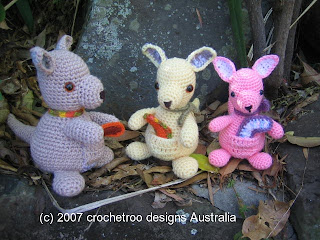 Meet the Wallaby joey mob! It has taken me a while to perfect these little fellows.

I feel like a nag for saying this, but the images and design ideas are copyright (c)2007 crochetroo. Please don't steal them or you will suffer the curse of the great kangaroo!

I have seen crochet kangaroos around but somehow they never seem to give the nature of the creature. I realised it is all in the ears, the feet and the playful approach. Wallabies are part of the macropod family which includes kangaroos, wallabies, wallaroos, pademelons and a few other marsupials. Macropod means "large foot", so I realised any crochet version would have to have the large feet. The legs took me a while to work out, and in the end I decided to just go with the foot, and imagine the rest of the leg. 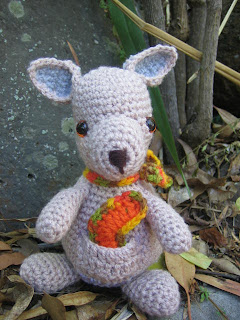 The kangaroo is one of the icons of Australia. It is on our coat of arms, and is the name sake of numerous Aussie sports teams. The Wallabies are a force to be reckoned with! It is also my name sake crochetroo. Maybe I should change my avatar!


There are currently 53 species of kangaroos in Australia with a number on the endangered species list. Since European settlement 6 species of Macropod are now extinct.


I say this because January 26 is Australia day which is the anniversary of Captain Arthur Phillip and the first fleet arriving at Sydney Cove. While we celebrate our Australian heritage on this day, which is marked by a public holiday and National celebrations, the joy is not shared by all. 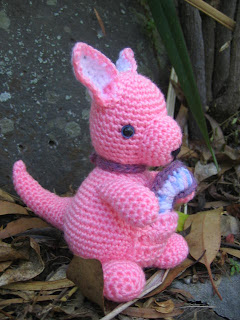 While European settlement developed our country in a global sense, the impact on the Indigenous people and our wildlife was significant.

The kangaroo poses a number of threats. Much of the land has been developed for farming. Bush fires and development destroy native bushland. Introduced animals such as dogs, cats, rabbits, sheep, cattle not only compete for food, but brought disease with them.

So this little wallaby joey is symbolic of our heritage. She also carries a boomerang in her pouch. What else would a little joey have to play with? It is the pouch that makes the wallaby and kangaroo a marsupial. Carrying the baby in the pouch gives the Joey a greater chance of survival. Did you know that males move away after about two years, but females stay with their mothers longer? 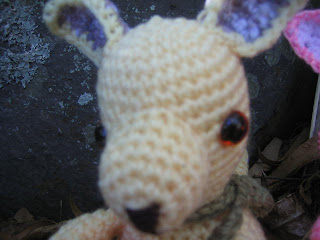 These little guys play in a mob so I made a few. Red kangaroos are found on the flat open plains, grey kangaroos prefer denser bush, and Rock-wallabies live among piles of boulders, rocky hills and cliffs.

I don't see many kangaroos and wallabies around the suburbs, but I have seen them in the early morning grazing in the paddocks down by the train station. Currumbin sanctuary has the best display in a natural habitat and whenever we have guests from overseas, this is where we head.

I have some more kangaroo inspired designs in the making.

If you crochet and you want to make your own Wallaby Joey, the patterns is now available at my Etsy store.

Thanks for looking. I hope you have enjoyed the story. 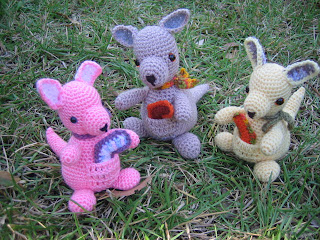 They are so cute! I was wondering if you were going to try to come up with a kangaroo someday. Woo Hoo! You did a great job (as always). :)

Cupcake, they are sooooooo cute! You make great patterns faster than I can keep up with! No fair!
These are precious!!!

Cupcake, your roos are the sweetest! As always, a triumph!Thanks for the informative post!

So adorable! Thanks for the info!

Cupcake,The little Roos are stunning, Where do you get the time it must take to finish all these lovelies, and the little penguin he is just a darling character Thanks for showing us. Jax

My trips to your blog are always great eye candy and informative. Keep the spirit of these little guys going!

Those things are just as cute as a bugs ear!

I am so excited to have found this - I'm a bit of a kangaroo obsessive from Scotland and actually squeled when I saw the image! Etsy will not load for me right now, but you can bet I'll be buying something from there in the morning and then getting it to my Granny pronto! Brilliant stuff, thank you!