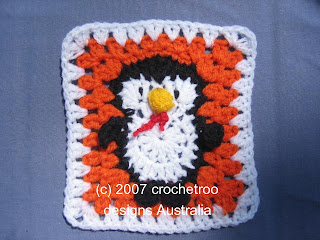 This motif is based the Australian Fairy Penguin, the smallest of the penguin family and is found only in southern Australia and New Zealand. Fairy penguins weigh approximately 1 kilogram and stand 30 cm high. They live in burrows, and are seen on the beach. Fairy penguins never see the snow. I have seen these in New Zealand and in Victoria a few years back. They are the most fascinating little creatures. Some are more of a blue colour than black, and each year hundreds die because of oil slicks. A few years back there was a major problem in Tasmania and the community rallied and knitted them little jumpers. Next spill (not that I want one) I am organising a crochet jumper effort. Check out this link:
http://www.innovations-report.com/html/reports/environment_sciences/report-7145.html
Other penguins are found in Antarctica to the south of Australia.
Lots of kids cartoons show Eskimos, igloos, polar bears and penguins living harmoniously together. This in fact would never happen in the real world. Mainly because you will never see a polar bear and a penguin together as they live at different poles! A penguin would be very lost to have reached the North pole! I guess the poor little fellows would never get to meet Santa either.
This square is another in my rugalugs series which are for sale at my etsy store.
http://www.etsy.com/shop.php?user_id=44224
The only way I can promote my work is on the net. I also like to promote an environmental message as well. So crochet, the net and the environment - what an unlikely trio!
I am quite enjoying these and a few more on the burner. I start off with an idea, and then do several in order to get the look right. The hardest bit is getting them into a geometric shape. They will need blocking, and even if they are a bit wonky, they never the less seem to pull into shape if surrounded by a contrast block. A whole rug, or afghan would look so cool! 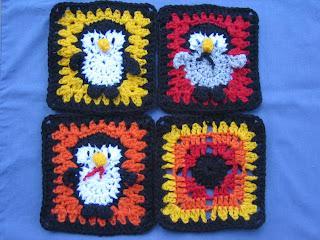 My son has decided he wants a rug to match his room out of these. They look very cute in brights as well as pastels. He wants black arround it, but I am thinking I might introduce some white into the contrast square.
I also then came up with a hat design. No point having a square if you have to make dozens of the things to make a rug! The hats turned out pretty ok as well. 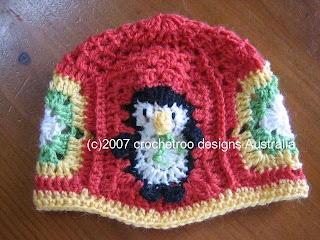 The orangey one is in pure Australian wool which feels wonderful. Although it is our summer and people would think you quite crazy if you wore a beanie on the Gold Coast at the moment! They would look kinda comfy on a little head once the winter arrives. 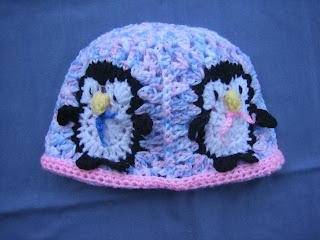 The pastel penguins are quite sweet. I am imaging these in a pram rug in soft blues and pinks. 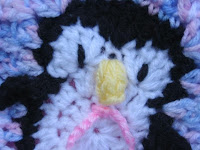 Thanks for looking. Please respect my copyright. These images and ideas are protected and remain my intellectual property. (c)2007 crochetroo.

Posted by crochetroo at Saturday, January 13, 2007

More Rugalugs! I think you may be onto something big here! SOOO adorable! I never knew that about polar bears and penguins, either. Very cute. :)

Hi, i just found your site, and wanted to say, that i love all the things you been making.


Is their a way we can get the pengin pattern block? i would love to use if for my charity squares. Thanks.

Cupcake, the hats you made are brilliant, I'll show my little niece as I'm sure she will want one. thanks for showing your lovely work to us. Jax

I just ordered a couple items from you. Your patterns are great! Thanks!!!

Absolutely gorgeous design! I love penguins, and love crafts. What a perfect combination!!!