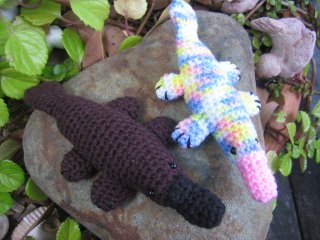 Ornithorhynchus is one of those words I remember from my school days. It was always on the advanced spelling list! It is also my hubs ebay name cos it is never ever taken, and he still remembers how to spell it!

So what is it... no less than the humble platypus.
Here are a couple of mine in crochet.

Sorry I can't adjust to the concept of the Amigurumie Ornithorhynchus! ( boy what a tongue twister though!) To me they are just plain old crocheted Platypus.

A bit like my Koalas, they are a special thing out of my head which I designed to travel well. 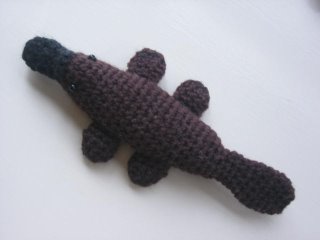 The one in the proper colours looks a bit drab, so I often use different yarns, particulaly variegations to achieve a different look.

I am a bit old fashioned, but I like toy animals that resemble the animal, and don't look like a Disney wanna be, or some poor feral animal that has been in a fight .

Now that isn't intended to offend any one, but at times these poor things get that distorted by the cartoonists that they have very little that resembles the original critter.

Tassie Devil is a good case to make my point. I remember some of those shocking mascots they had for the Sydney Olympics. Syd the Platypus looked like he was on speed! That is my view any hows... 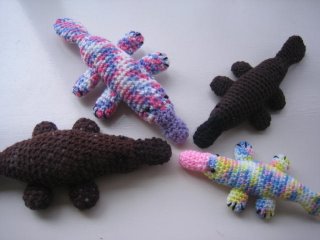 The platypus is particularly shy. I have probably only ever seen one in the real, in its natural environment. This was in the bush in a lagoon that came off a water fall. They are nocturnal, and very quick to move.

Quite an odd looking animal really, an egg laying mammal with a funny bill, and webbed feet. The bill always looks like it has been glued on.

More than One platypus are called "platypus" or "platypuses". There is no such thing as "platypi" although I have heard this term used. I also recently heard the name "puggles" used to refer to baby platypus and echidna becasue of their resemblance to the soft toy. Apparantly the toy company wasnt too impresed and may have taken legal action. While I cant find any proper name for baby platypus, the word platypup is often used.

They are also the little fellow on the Australian 20c coin. If you scroll through my blog you will find one of these as well on another post. Now there is some platypus trivia for you!

I enjoy making these, although they dont have the instant appeal of the Koala, they are simple enough.
Posted by crochetroo at Saturday, July 15, 2006

I didn't know any of that so thank you for the trivia! I've never been to Australia unfortunatly so I haven't seen then in their real environment but I have seen them in the zoo^_^ I'm sure they could've come up with something better then "water mole" though lol! I really like the bright coloured one with the pink bill it brings out the way it's really different from the rest of it's body^_^

You are right, its better fr the toy animals to look real, but they sure are cute in varigated colors!

Could you please give me the addy for the pot toppers I would love to have the pattern Tatteredheart123@yahoo.com