I cant believe how long it is since I last blogged. I haven't stopped crocheting though!
Meet the possums. I called these guys Pesky, because they have taken me forever to perfect! Possums are a protected species down here but are pesky when it comes to eating the fruit off the passion fruit vine, and the paw-paws in the back yard!
I humbly declare that I think these are my cutest critters yet, and well worth the wait. 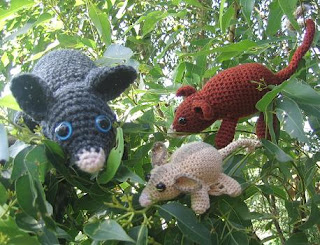 I remember my husband reaching up into a carton in his under the house blokes area in search of a hammer. He found asleep in there, what he thought was our cat, stroked and lifted it down to see it was a possum. Scared the living daylights out of him! Not to mention the stunned look on the possum as he scampered away.
These often hang about our bird feeder and you can hear them scratching around on the roof at night. They are a real pest if they get into the ceiling. Many years ago one did and my son couldn't sleep at night because of the racket. We thought it might have been a rat (UGHH) but the pest exterminator man trapped it and yep, it was a possum. Possums are protected here so he took it out to the bush and released it.
The challenge for me was to make several species as each has distinct characteristics. 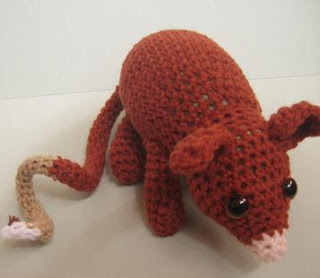 Ring tail possums are a medium sized species. Fully grown they are the size of a kitten or large guinea pig. They range in colour from a beautiful russet red to brown with a tinge of grey. Tails are very long with a distinctive ring and often have a white tip. Ears are very small and close to the head. I did this one in a rusty brown. Here he is hanging about in the gum trees. 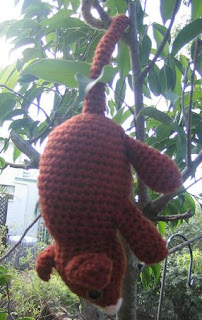 Brush tail possums are a larger species and when fully grown they will be a little smaller than an adult cat. They have a grey to grey/brown coat on top, and can be a soft cream to a beautiful ‘pumpkin’ colour underneath. Their ears are large and stand up from their heads. Tails are black and fluffy. 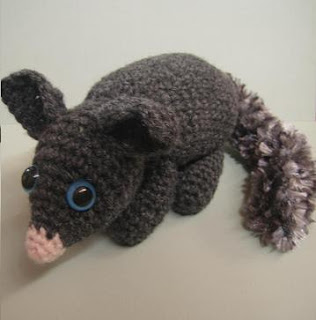 The brush tail is a bit of a nuisance where they have been introduced in New Zealand. While they are a native species here and we put up with them, over seas they are regarded as lowly vermin!

I think the brush tail is a lovely critter with a fluffy tail. Early settlers would kill these for their skins. Possum fur has a similar feel to mink. Possum were introduced to New Zealand from Australia approximately 150 years ago to establish a possum fur industry. They thrived in New Zealand to the point that they are now considered a pest and a threat to the native bird life and flora. 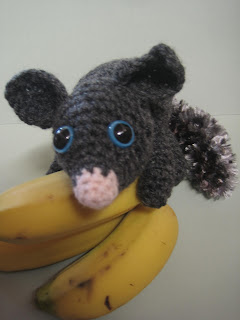 And here is the tiny Glider possum. There are several species of gliders including sugar gliders and pygmy possums. All gliders have a membrane running down each side of their body which they use as sails to glide from tree to tree. These are tiny marsupials which can fit in the palm of your hand. 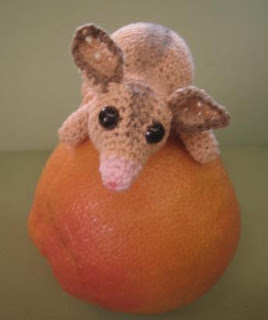 The pygmy possum is now an endangered species. Urban cats and dogs have significantly reduced the numbers as has deforestation. I was interested to learn that in some countries sugar gliders are kept as pets. They are particularly cute and easy to handle. 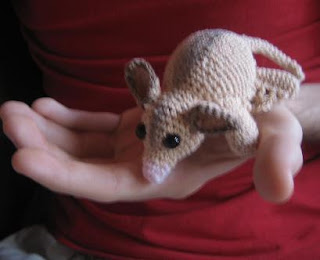 Leadbeaters possum is the animal symbol of the state of Victoria. It was thought to be extinct, however a few have been found and it remains an endangered species. The recent Victorian bush fires would have really damaged their native habitat.

Possums are another of our fascinating marsupials who have their babies in a pouch. They are also arboreal living in the tree trunks and nocturnal, coming out at night. 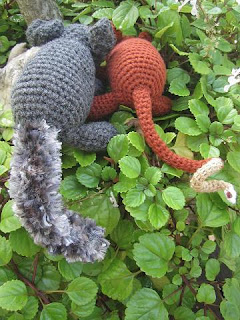 I hope you like my pesky possums. I have the patterns listed on etsy. My next crochet challenge is the Tasmanian devil.

Thanks for popping in, and do leave a comment!

The adventure of a redneck mommy. said...

these are way two cute ,, my husband loves possums.. I'll have to get this pattern and make him one.. my little girl LOVES llama.. i found a loopy llama at innerchild but that might be a cute idea ive never made any of these amingori things or what ever they are called..hubbies bday is on the 18th of june .. maybe i can make one before then..

It's nice to see you back blogging. And with an interesting pattern. You are getting more and more skilled in defining the individual characteristics of each animal species. Great work ! Cute possums, Dame Edna would be proud of them !
Keep crocheting !

So adorable. Very clever. And I noticed on the Etsy by Numbers site that you are top of the list for Australian Etsy sellers in Sales..So Congrats. What a fabulous achievement..

Hooray, and welcome back to blogging. Very cute and distinctive patterns, as always. We have possums in the neighborhood here in South Florida. I have papaya (paw-paw) trees outside my window, and one of the fruit has a bite out of it. I thought it might be squirrels, but you reminded me it could be possum.

Meant to say, the Brush tail is my favorite one. I love his fluffy tail. :)

Great to see another post from you - I was definitely starting to feel a bit short on cute crochet inspiration!

The possums are fantastic and very adorable, after seeing your sugar glider I now want one for a pet... maybe I'll just have to buy the pattern and make one up to pet instead :)

oh my gosh!
they are amazing! you are so talented!

well done !
I love the possums, with a slight preference for the brush tail one, the cute pest ! Thanks for your blog.
Cecile from france (learning about crochet and Australia at the same time - how good is that, eh?)

Oh they are gorgeous! Thank you for sharing the pictures :) I love that you gave me a lesson on the possums as well! I'm fascinated by Aussie animals. Good to see you again xx

Enjoy your blog and just a quick note to say you were missed. Nice to have you back.

Those are cute. What awesome imagination you have.

Those are simply adorable! I`m glad you are selling the pattern for them, it`s definitely on my wish list!

Now these are some possums I can actually look at! haha! Adorable!!

I'm in the States, South Carolina, and unfortunately possums are a road hazard around here.

Good Morning!!! crochetroo.blogspot.com is one of the most outstanding informational websites of its kind. I take advantage of reading it every day. Keep it that way.

I love your designs. The possums are to-die-for cute. Your shawl designs just became my latest "must do"s. This is a great blog. Please keep it up.

These are amazing! Thank you for your inspriation. I cant wait to buy and then make these up - just need to get some more practice in first (I only leanred to crochet last night - so still leanring and it's all a bit wobbly - made worse by following a US pattern and using UK stitch guide - after an hour on google, I figured out what was wrong lol!) Sue