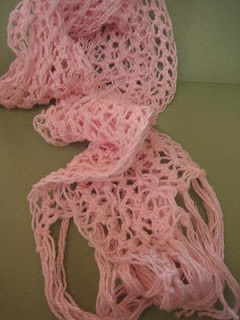 One of my latest fascinations has been with hairpin crochet. I remember as a kid my Nana would make hairpin crochet and I could never quite figure it out. Nana was also a fan of the broomstick as well and made many a rug using this technique.
Hair pin crochet forks aren't that available here. In fact I cant recall having ever seen them in the craft stores until very recently. My favourite Craft joint Spotlight, has one of those discount clearance tables up the back in the wool section. I stood there for about an hour a few weeks ago, sifting through the remnants of odd balls of wool, odd goggle eyes, beads, light up knitting needles that haven't seemed to really catch on, a pile of miscellaneous patterns and a few humble hairpin prongs. These had been respectably reduced from $4.99 to 50c each. And how I love a bargain, so I bought 4 in different sizes and challenged myself to learn how to use the things.

The major challenge is starting off. It is one of those left - right spacial things that once you get the hang of, is quite relaxing. However, until you do get the hang of it, hairpin can be incredibly frustrating! The flipping the thing around totally messed my head.

This was my first major hairpin project. I used a pattern on the web and adjusted the length. The yarn is a 5 ply cotton and acrylic mix that I found in Lincraft in Brisvegas. Given this was my first attempt I chose a heavier yarn in a bright colour that was easy on my eyes. 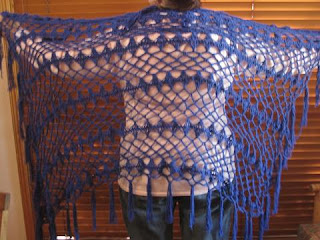 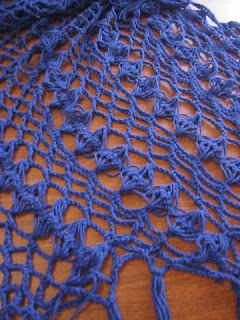 Having now mastered the hairpin knack, it has become a major time waster. Recently I travelled to Cairns in far North Queensland and decided to do a day trip up to Kuranda in the rain forest. This was a fabulous outing as I got the train up, and the Skyrail back. Whilst waiting for the train I pulled out my hairpin, determined to make the most of any down time. As quick as you can say "double crochet" I had a swarm of English and European Tourists watching what I was doing. One of them asked "is this a local Australian Craft". It was one of those moments when I realised how little the general person knows about crochet. This group of tourists weren't gen ys either! They were the over 50, retirement tour group! 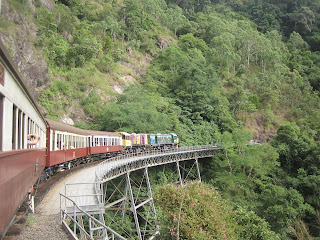 So whilst sitting at the train station north of Cairns here was I showing a bunch of Tourists, the craft of hairpin crochet. My kids would have been horrified as the boys have banned me from CIP ( crocheting in public) since the time I tried at the light hook at the movies! The picture below is from the skyrail over the rainforest. This has to be one of the most amazing pieces of scenery and engineering I have ever experienced. 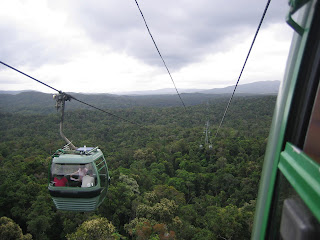 So here is the wrap I made a strip of in Cairns. I used a pretty cotton mix that has a slither of silver sparkle through the thread. I was trying to get a lighter, dressier type of effect. I learnt doing this that stitch markers are a good idea to stick on the prong to keep count of the 50s of loops. I nearly went nutty checking the count on this. 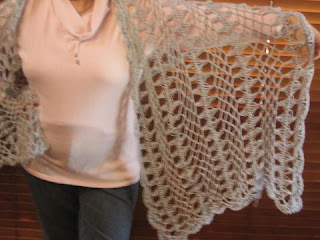 This little pink skinny scarf is an experiment with a left over ball of cotton thread. I wanted to try the loop technique of joining. This is where you weave the loops of the strips to join them together. I made 4 strips out of the ball and am happy with the result. 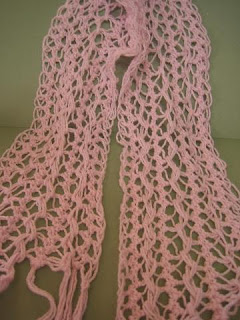 You can see in the close up how the loops interweave. 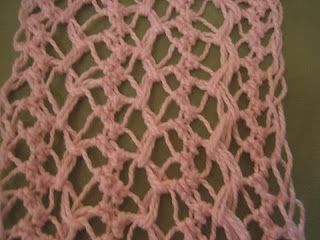 I am now experimenting with what else I can make as I think I have more than enough wraps now. I am trying a bag and have a few other ideas in my noggin. My Nana would be pretty proud of me if she was still around.
Thanks for looking!

Beautiful work - well done on mastering the hairpin. I am making my Gran proud too as I am picking up the art of crochet - I am sure your Nana would be proud.

wow! those scarf are so lovely and pretty! u did i great job with those :D
I was wondering if u used a patttern or if it was like from your own invention? i wannna make one of those for a friend, if u didnt use a pattern what kind of stitch did u use i cannot really tell,
tnx, J!

How beautiful! It looks like you mastered it quite quickly!

I recently tried broomstick lace - now I feel like I need to learn about this technique!

It looks beautiful, but I doubt I could wrap me pea brain around it. :P I tried something called 'lover's knot' crochet once (probably nothing like this, but...).

The scenery looks beautiful; I hope you enjoyed your day trip. :)

That gray shawl is beautiful! This makes me want to give hairpin a try now!

These pieces are beautiful! I taught myself how to crochet about six years ago and find it very relaxing. Someday, when my kids are older and I have more time, I would love to learn hairpin crochet and knitting.

I have always loved hairpin lace crochet and have wanted to get back into it. Your blog was exciting for me to see your projects. Where do you find your patterns? Thanks, Joanne

“My kids would have been horrified as the boys have banned me from CIP ( crocheting in public) since the time I tried at the light hook at the movies”
< ROFLOLOLOLOL !!! OMG !!! This comment is what brought me to post, which I rarely ever do.
I have not done this, but close. I am always "Hooking" EVERYWHERE. People that know me just chuckle. This is something I may someday be found doing too! Those lighted hooks are more precious to me than gold! I was given a gift for an automatic car wash... guess what I was doing! LOL
Oh, I could go on & on, ssry to be so jabbery!

“So whilst sitting at the train station north of Cairns here was I showing a bunch of Tourists, the craft of hairpin crochet.”
< YES, this is me too! I relate so much. I am always amazed at the different types/ages of people that want me to describe what I am doing!
*I think it's because they are bored, buy not smart enough & the type that only take the mininum. LOL @ them!!!!*
I do enjoy the stories people share, usually of their ancestors & it’s great free advertising =I have had many requests & which I need to replenish my stash ;)
When home I don’t have time to Crochet at I am usually putting together projects to take with me... my doctor’s staff always seem a dissapointed when I don’t have a new 1 to work on each time I go in <shocking to me that they remember] LOL <I am always the last patient to be called in; must be bcz have something to do that is entertaining to others????

“The picture below is from the skyrail over the rainforest. This has to be one of the most amazing pieces of scenery”
< I agree it is lovely; LOL someday I never will {sadly say this about many things) see it in person.
I love the pic... would it be ok with you to dnld it to my pc as a desktop pic?