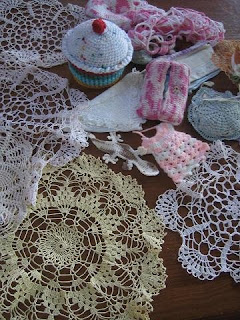 Earlier this year my Mum in law, my kids beloved Grandma, left us. One of the hard things when someone passes is not just dealing with the grief, but the finalisation of her belongings.

It has taken us several months to slowly go through things, which while being an emotional time, was also a healing process. She had 3 sons, and none of them could go through her cupboards. I think it is a man thing, that sorting your mothers personal things is forbidden. So the task was left for me. Grandma was an immaculate woman, with a place for everything, and everything in its place, so while it wasn't a hard job it was a time of reflection.

My Mum in law could never crochet. She used to boast how clever I was (not because I had a Uni degree) but, rather that I could crochet.

I made and gifted her many things over the years. While many of them I had long forgotten, she has treasured every little item.

I had a moment of sadness and said to hub - "She has kept everything I ever made her" to which, as you would expect a bloke to say responded - "well you didn't think she would throw them in the bin!". So here is showcase of some of the things I found that I had made for her. 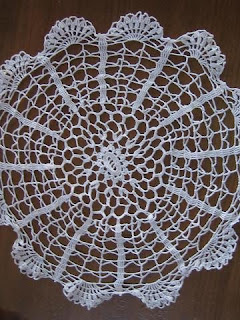 Doilies, she loved doilies and I always knew this was a cherished gift. I had though, forgotten how many I had given her over the last 30 years. White doilies, ecru doilies, ;emon and purple doilies. 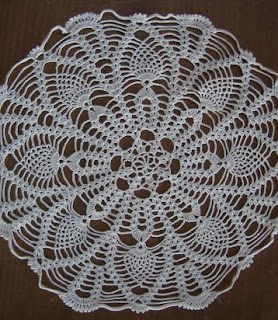 Ecru doily with the pineapple pattern, I think I made this is the early 80s. 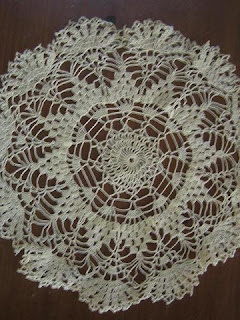 A yellow doily with an old design from one of my Nana's books. 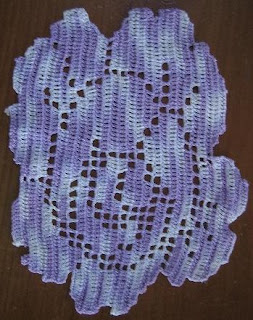 I actually remember making this lavender fillet rose. I can't work out how to turn the photo, however this was one of my first attempts at fillet crochet. The rose is a bit stretched because my tension was tight. I remember making this one for her shortly after my husband and I became engaged. 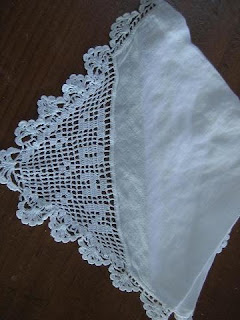 This is another piece of fillet that I worked her name into the corner of the handkerchief. She has kept this for many years, and I found it with some other handkerchief's I had edged for her. I am going to keep this one in a safe place in case one day, my daughter gets married, this can be her little piece of Grandma on her wedding day. 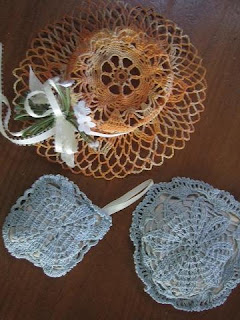 These made me laugh as the yellow hat is from the starched crochet era. I used to make doilies and them shape them with white glue over a cottage cheese container. There was a Leisure Arts brochure at the time that had a number of variations of these. The sachets were in her cupboard. Crocheted by me in blue thread, they are drink coasters which I then stitched onto little fabric pillows I made, filled with lavender and stitched on a ribbon to hang on a coat hanger. 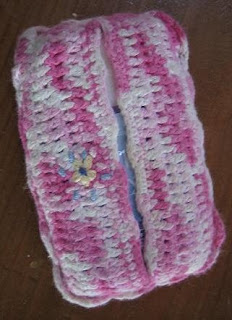 This is a pocket tissue holder. I had forgotten all about having made these. One Christmas in the mid 80s I crocheted a pile of them in different colours and used them as stocking stuffers. I will try and write the pattern out if anyone is interested as they make great little gifts. 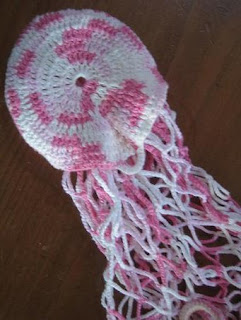 The funny looking creation above is one of those string bags that squeezes up and fits into the round pocket. I have also liked the variegated threads! 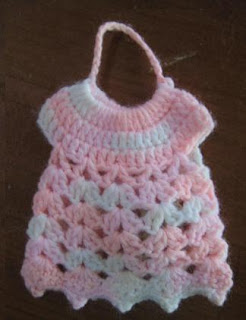 And this little oddity is a moth ball or camphor holder. Another funny little thing I made for Grandma years ago; and she still had it in her cupboard. I can also write this pattern up if anyone is interested. They make cute little decorations on the tree and can be filled with scented timber balls or lavender. Very kitsch, but very cute!

It was therapeutic for me to find these things which I had long forgotten. There were also scarves, and shawls, and crochet towels and afghans that I had done over the years. I will show them at another time. This will be our first Christmas without Grandma, however she will always be with us in spirit. I feel honored that she treasured my work, and despite downsizing over the years, had kept my crochet.
Thanks for looking!

I've never commented here, but I love reading your blog and looking at your pictures.

How lovely that you found someone to love that which you made her. I am always making things but can never find anyone that wants homemade stuff so I make it all for charity every year.

I can't imagine any better gift than to know that every single thing you made her was saved, and I'm sure, cherished.

This is such a sweet story to start my day off with. Thank you. Your grandma reminds me of one of my aunts. It is good to feel so loved and appreciated. And your work is lovely.

My heart goes out to you...I know how difficult it must have been. I also feel a small smile through the tears that she kept and treasured all of these gifts from the heart, as well.

They are all beautiful.

Thanks for sharing your lovely memories.

The Heart of Paul said...

I can only imagine the mixed emotions running through you as you sort out your mother-in-law's items.

All your gifts to her are really nice. I look forwards to seeing the crochetpatterns put up here.

What beautiful memories :) I'm sure it was a bitter sweet experience for you. I hope you can find enough comfort in the fact that you were well loved by your 'Mum' and that you had so many wonderful years together, to get you through the sad times.

You made me cry, and that's a good thing. I don't do it often. I'm thinking that I should be asking my mama for some of her many crocheted things now, while she is still here to share the memories with me.
All of the women in my family crochet except me. I learned to read when I was two--and KJ English, at that. But I could never read the crochet patterns! You have my admiration.
And thanks for sharing your heart.

You do such beautiful work - did you also make the little cupcake. I love it - so cute.

Reading your post brought tears to my eyes, as I have also been through this sorting process; what a comfort to find proof that everything you made was treasured, you see how much you meant to her. Good healing therapy.

It must have been bittersweet looking through all of the items your Grandmum has kept. They are all beautiful. I am sorry to hear about your Grandmum passing away.

what a lovely way to take a walk down memory lane.

I, too, lost my adored Mother-in-law this year. I had only known her for five years. She welcomed me as a new daughter-in-law with open arms and heart. And, I too, discovered the things I had made her had been treasured. I think we were both very lucky to have such loving people in our lives.