A Day on Moreton Bay 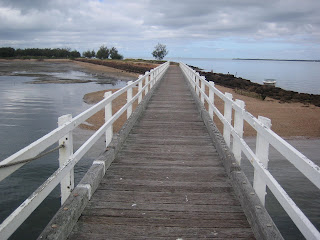 Last weekend we spent the day with my brother and his wife out on Moreton Bay. It was a glorious day, but not much wind. We headed for St Helena Island. Funny that even though I grew up in this part of the world, I didn't know much about this island, or its rich history.
St Helena Island is about 4 kilometres east of the moth of the Brisbane River. Its claim to fame is that it was a penal colony in the late 1800s and a prison farm in the early 1900. The photo below shows the ruins. 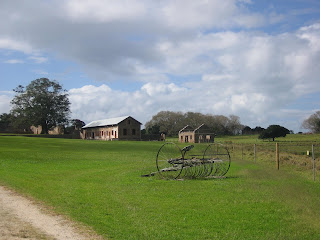 This is the wetlands of Moreton Bay. It was low tide but a beautiful day with about 5 knots of wind, which makes sailing pretty hard going! 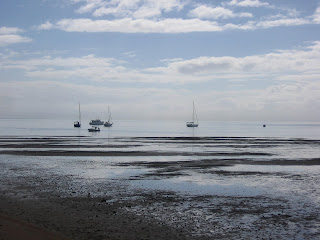 My brother tells me that they used to run an abattoirs on the island and throw the animal off cuts into the sea. This of course attracted the sharks, hence keeping the prisoners in place!
This odd looking structure below was erected as a swimming pool designed to allow people to swim in a protection from the sharks. Not sure how they got to it though as it was a few metres from the beach. 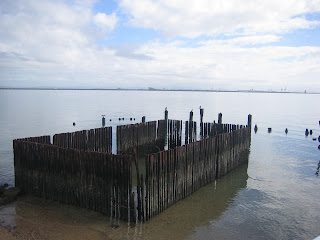 St Helena is now a National Park protected as a historical site. It also has significance as the shelter of a range of migratory birds. 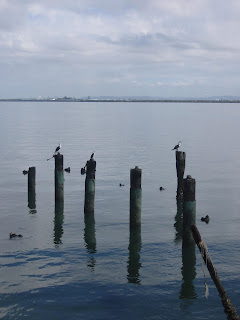 This is my brothers boat from the rubber duckie. 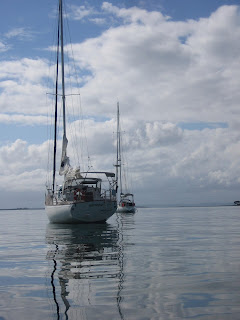 We stopped out to sea and the boys went for a swim. Yep they are stupid as it is the middle of winter here. They had a hoot jumping of the boat into the ocean. Apparently the icy cool salty water was quite invigorating! 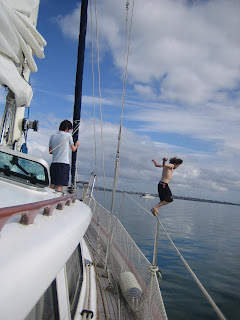 I also believe that the icy cool salty water numbs the brain as they did this a few times so I could photograph them in flight! 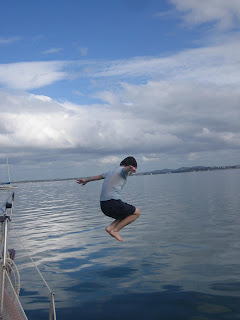 As for me I stayed dry and crocheted, while sipping pink champagne. I cant go anywhere without a hook and some yarn. 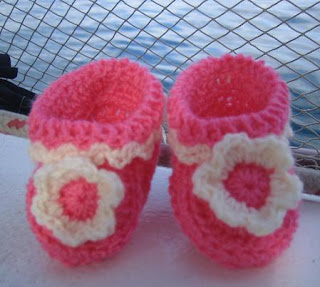 You can see the coast of Brisbane in the distance and the sail boats trying to race on quite a un -windy day. 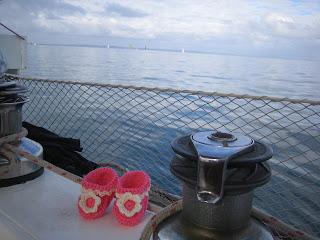 My little booties look nice and bright against the serene blue backdrop. It was a special day with the family.

What a lovely pictoral story! Thanks for sharing!

I went to St helena island on a history excursion in 1998. Its an amazing place and I hope to go back some day!

Did they tell you about the prisoner who tried to escape in a bath tub? He almost got to land before they caught the little bugger if I remember correctly.

I can't imagine the horror it would have been to be imprisoned there.

Wow! That looks so lovely!! I would love to be on a boat with my hooks and yarn sipping pink champagne!

How absolutely fascinating! What a great idea to encourage the sharks :D
i love the booties as usual, what a great colour to crochet while sipping pink champagne :)
I have to say your boys must be mad tho lol
sam xx

Hallo!
My english is not so good.Please i want to Translation the Pattern off the Fan-Bookmark.
I am verry happy,wenn i can do it.
My name is Martina and my Home is Germany.

What lovely photos. and so much fun on the boat. The pink booties are so cute.

Congratulations, I have awarded you the Kreativ Blogger award. You can find full details on my blog.

That looks like so much fun. I guess 'boys will be boys' no matter where they live. lol ;) (We have three...) The story and pictures are great.

What a pretty day.
It makes me want Summer back!