June was a sad and emotional month for our family. Many thanks to all the warm thoughts and hugs that were expressed.
My Mum in law lived about 2 1/2 hours drive north from where we live, and hub and I spent many an hour driving back and forth over the last few weeks. Crochet is my therapy, and it goes where I go. Here are some of the things I made over the last few weeks.
I have been meaning to finish off these koalas for yonks now, and I have finally done it. I have even finished writing the patterns up.
A Koala Party Beanie: 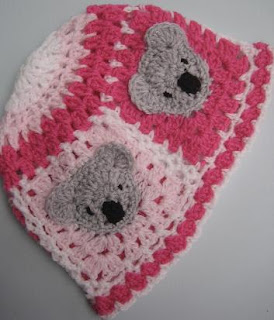 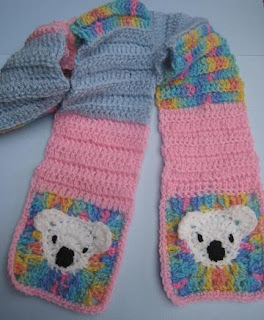 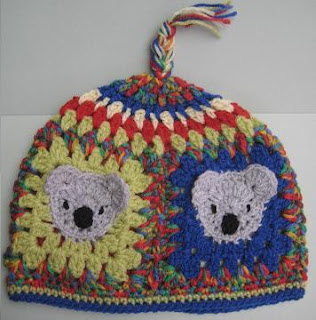 Yes, I know I am obsessed but I just love koalas. 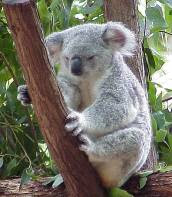 They are the most amazing animals, however after I was tiring of Koalas I thought I would do a kangaroo beanie. 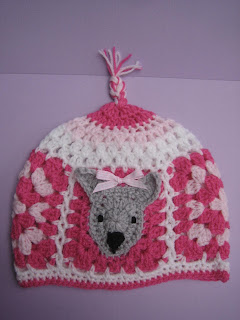 Because I wasn't very organised, I had only grabbed a few colours so it is the same mix as the first koala beanie.
Friends of ours in Townsville also welcomed their new son into the world on the 4th June. He was well over 9lbs which is a whopper of a baby for my friend who is less than 5ft, and about normally about 45 kg. Babies are Gods little wonders and I made him some baby blue ugg booties. It is our winter here so these are perfect for the cooler weather up North. I surprised my self by not only making these , but also having mailed them off within about 3 days of bub being born. This was a happy moment amongst our sadness but reminded me how life goes on. 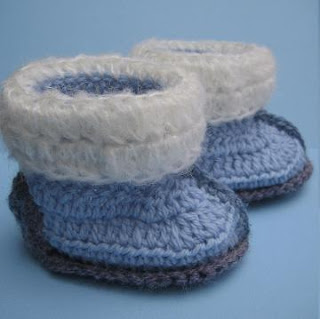 I have also been experimenting with some lacy mitts. Our Daughter took the first set I made as she was home for Grandmas Funeral. The ones below are a second set I made to see if I could remember what I did. 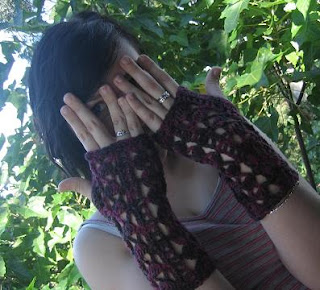 She also fancied the beanie and scarf to match. Again the scarf was an experiment in a loophole, shorter version.
The problem is that while I wrote down rough notes, the set is now back in Melbourne, and I am having fun trying to remember exactly how I made them! 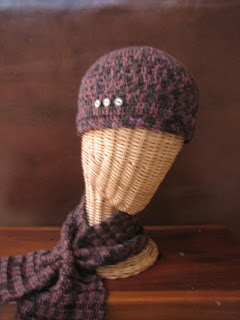 The model is my eldest sons girlfriend. She is a terrific model and I ended up making her a beanie in blue and a scarf to match. She really likes the things I make. As many of you would know, there is a real buzz in having your crochet appreciated.

So crochet is my therapy, and I have been productive while I have been away from my blog. Grief is a terrible feeling. I find that the best thing is to keep busy. Grandma would have been 84 on July 19. She lived a wonderful life, had 3 sons, 3 daughters in law and 6 grand kids. She was fortunate to have lived independently in her own home, with her mind as sharp as a tack up until the week before she left us. She partied hard with us for my birthday in March, and was the life of the party in her sarong and hibiscus around her neck. She always had a sparkle in her eye, and took such interest in others. She would have enjoyed seeing what I have just shown you. We miss her already. 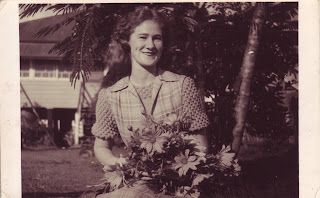 I'm so sorry to hear about your mother in law.

I love my MIL to death, she taught me to crochet and we talk 'shop' all the time.

Love to you and your family.

its great to see you back!!! i was getting worried. i hope life is getting back to normal for you all now!

I love the koala hats and scarf.
The lacy mitts and the Ugg boots are gorgeous.I think you are so right to immerse yourself in crochet. It does occupy the mind.
I am sorry for your loss but take comfort in the fact that your MIL lived a full and active life right to the end. As you said your MIL would have loved to see the finished items so carry on crocheting for her sake as well as your own.

Lovely pic of your MIL; Thanks for sharing. So sorry for your loss. (All of your projects are adorable!) yarnorgy (Bethany)

Its good to see you back :)
I hope things settle down for you soon and the grief gets easier. I love the koala creations, and especially the pretty pink roo :)
Take care
sam xx

Lovely your koala hats and scarfs, so funny and pretty. Congratulations for your work and blog.

Your projects are just TOO COOL!!! I'm a crochet "wannabe" - I have all the books and supplies, I just have to practice! Thanks for sharing your creations.

Hello
I wrote to you via the etsy site because I so want to make your ugg boots for my god daughter who is due in 2 weeks or less!
( I want to pay by cheque for them that's why)
I love your Aussie creations and was wondering if you would be interested in a link exchange with me. I have a small website for my Aussie cross stitch designs
www.carrolsx-stitch.com

I am very sorry to hear of your sad loss. You were lucky to have such a wonderful relationship with your mother-in-law, and to have lovely memories of time spent together. Bless you.
Lynn