Rugalugs square number 9 is the Tasmanian Tiger which can also be used as a kitty cat, or a tiger and other feline friends depending on the use of colour. 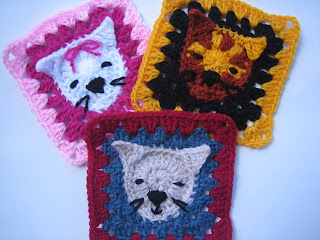 This is the 9th square in my rugalugs series. I decided I needed a cat, so the Tasmanian Tiger was the perfect critter to choose. The story of the Tasmanian tiger or thylacine is a sad one as they were declared extinct in 1986. The Tasmanian tiger was a marsupial dog with a pouch like a wombat, a head like a dog, and stripes and tail like a tiger. So it was never really a cat at all! The same way as the Koala was never a bear. 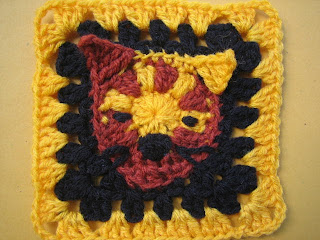 The last known thylacine was captured in 1933 and died in 1936. Their demise was accompanied by European settlement and the introduction of sheep to Australia. As a carnivorous animal they were captured and killed by the farmers. The government at the time placed a bounty on the slaughter of the thylacine. They became rare and in the early 1900s were purchased by zoos around the world. The last one died in the Hobart Zoo on the 7th of September 1936. The 7th of September is now marked as 'Threatened Species Day'.

The story of the thylacine is a message to us all in conservation and protection of native species. It demonstrates how far we have come in less than 100 years in terms of environmental awareness, and how awful we have been in the past in respecting the world around us. I cant fathom what the heck the early settlers were thinking? I read somewhere it was about the sheep, as the tigers used to kill them. Such a tragedy that the farmers had such little appreciation for the special creatures we had here. We took the kids to Tasmania a few years back and had a great time trying to see a tiger as we drove around. It is such stunning state to visit, but sadly no tigers. 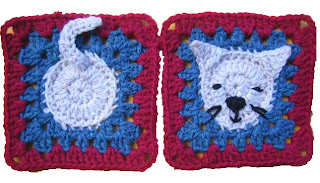 Domestic cats can be a bit of an environmental nuisance as they kill our birds and wildlife. The feral cat is also quite destructive on the environment, and the native critters at risk as they compete against the introduced species.

I came up with a tail end. The boys call this (rather crudely) his date hole. You can turn the tail around and add a bow for effect. The real tiger had a stripey tail and you can get this effect in variegated yarn. I have done it plain as this photographs much better fro my blog.

And this is little Tasmanian Tiger Kitty. 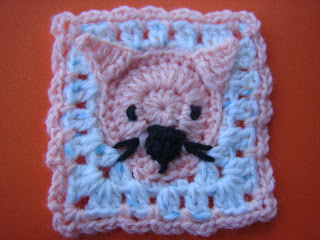 I designed this square in 2 sizes with the potential to be adapted into a kitty cat as well as a tiger.

The tigers look great on stuff for little boys and I have been making a few hats with tigers on the front. One day when I have finished designing all of these squares I might get round to making an afghan out of them all. At the moment I am enjoying the fun of making little projects with little kids in mind. Our daughters boyfriend is a mad Tigers supporter. She has crossed the floor from Queensland to New South Wales now which is quite risky behaviour!
Tiger Teams always have good colours though. The yellow gold and black is pretty stunning!
My next rugalugs is a Baramundi Fish. So far it looks terrific and I will share it with you soon.

Thanks for looking!
(c) copyright crochetroo 2007. Do not copy or imitate as this is bad karma and your chooks will turn into emus and kick your dunny down!
Posted by crochetroo at Tuesday, August 07, 2007

It looks great.. and always a pleasure to read the stories !!

HI, just found your site and its fantastic! Good to see another Aussie crocheter :D

OMG this is just too cute, I love tigers!!

Daw, soooo cute! I've been on a granny square rampage lately and these are fueling the fire for sure! lol. Love your blog!

The square is great. I love it everytime you create an animal square, and I especially like to learn of the species.

Your squares are always facinating.

Each on is unique and interesting.

I love the square. It is great!

Wau, this is Grreat, mjiau!