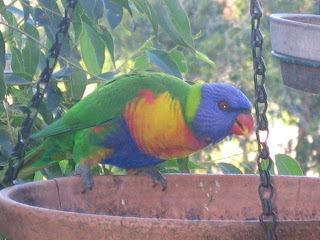 This is a picture of a rainbow lorikeet feeding on my deck. We leave wild bird seed out and they don't miss a trick. They visit in large numbers and are spectacular in colour. These fellows are so bloody noisy though! They squabble and fight and leave poop everywhere. But gee they are a stunning creature. I have been working on these guys for a while, trying to recreate a lorikeet in crochet. Getting the body shape and the look was the challenge. I used a bit of creative licence and tried to cutesy them up a bit. 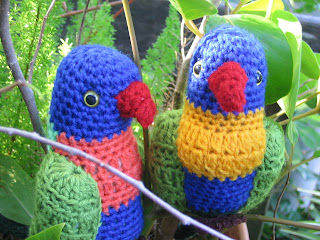 The Rainbow Lorikeet is a small parrot and native to Australia. Colours to try when making rainbow lorikeets include yellows, greens, orange, blue and reds. They have red beaks and red eyes. I can't get red eyes here so had to do with yellow. I think they look a bit evil with the red eyes any way. Sort of like the demon lorikeet.


Surprisingly enough this colourful bird can be hard sometimes to pick out in its natural habitat. They are a small bird generally 11 to 12 inches long, weighing 120 to 140 grams on average females are generally a bit smaller and adolescents have duller markings They are said to live over 20 years in the wild. These guys make a heck of a racket from "screeching" in flight to "chatting" during feeding.

Rainbow lorikeets are found all over the north-east of Australia. Their habitat ranges from forests of all sorts (heathlands, open forests, rainforest) coastal or inland, to any area including urban areas that have suitable trees - and of course my deck. 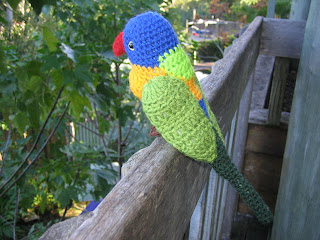 They are normally found in flocks and make a heck of a racket at feeding time. “move over will ya mate so I can have some seed as well?" "crikey mate I was after that bit". We try and imagine what they are saying, as they a a bit like a noisy family at dinner time.


I have attempted to achieve the look of the rainbow lorikeet without getting too complicated with the pattern. I am amazed at how tame they are as I can walk right up photograph them. This guy was a bit of a poser. 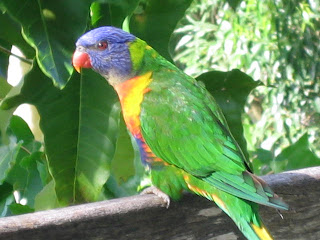 I never get tired of watching these birds. They have a sanctuary here where the birds flock in the thousands at feed time. Quite a spectacle. Interestingly though they have pest status in some areas and aren't real popular with the farmers. Somehow the little blighters found their way to Perth University and were released into the wild in the 60s. The numbers have grown to pest status. They have also made it to New Zealand. A flock of these birds can strip an orchard bare in no time. I believe there are also rainbow lorikeets in the Eastern Coast of the US. 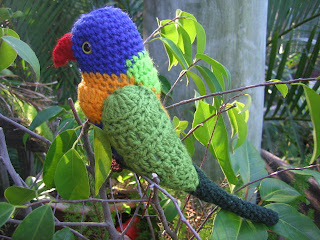 The crochet pattern of the rainbow lorikeet is the latest in my Australian Native Birds series. I did enjoy this one as the colours were so much fun. Thank you to my wonderful testers, the patterns are available on my etsy store. Thanks for looking.

(c) crochetroo. Please do not copy my photos or ideas. I don't like to watermark as it is ugly. Links to this page are fine.

Having printed the patterns I bought from you last night I spotted the blog link and its taken me the best part of the morning to read through the archives! Your animal patterns are cute and inventive and I want to crochet them all! The afghans/throws you have made in the past are beautiful and inspiring. Thank you for sharing your crochet ideas with me.
Jacqui (UK)

Your birds are so neat! I love your budgies too. Incidentally, our zoo here is having a Budgie bird display (?) this summer. We hope to go before they are gone. Someday I want to buy the pattern, too. You are so creative! I love all your patterns. :)

I love your lorikeets. We have a Pionus and a Rosella. I believe the Rosella is native to Australia. I'd love to make the loris, but don't have the time. But they are truly beautiful.
Tam

I love all your patterns would love to buy them some day because I love to crochet birdsand other thinks too. Keep up the great work.

Wow how lucky yo are to have such beautiful birds visit your deck. I wish we had birds that beautiful here in the USA. Your crocheted version is adorable!!

oh how beautiful those parrots are. I had a Red Lord Amazon for 28 years before he died... I do miss him often. They are such fun...Your birds are gorgeous.. I would love to share any pattern or buy the pattern from you...I am a bird nut and all feeders all over my yard...:)

Your Australian crochet animals are excellent, original and super cute. I enjoy popping by your blog to see what new critters you have created :)

That so pretty birds!!!
congratulations!

Very life like lorikeets.Vibrant colours too. Your fruit baskets too are real gourmet.Do you follow patterns or do freehand crochet.You seem to be a master at it.
All you photos are so different that I just had to leave a comment.
I am fom India.

I love your parrots and budgies. I am actually looking for a pattern for a parrot teapot holder my Mum had years ago to put on the handle of your teapot.

Just started in crochet, but I have an African Grey and a male Eclectus. I was poking around for stitch patterns I might put on some napkins, when I stumbled across your incredible Rainbow Lorikeets! I've met these chaps in person at the Portland (Oregon, USA) zoo. They're devilish fun!

Beautiful! I've been searching for felt lorrikeets (as in, sewed felt, not knitted then felted) and these pics were returned on google images - I had never considered crocheting the whole bird! Just gorgeous and immense fun. Glad I stumbled upon you.