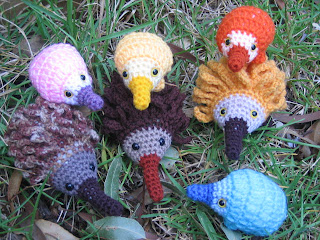 Happy Easter to you all! A time that is about new beginnings, fresh starts and family. I thought this a perfect time to share my echidnas with the world.

When I undertook to design an echidna in crochet, I took on one heck of a challenge. The trick is getting the echidna look, and not becoming a hedgehog or porcupine. I have seen some really cute crochet hedgehogs, but they often use fun fur which although it gives a spiky look, is soft to the touch. I did consider doing a loopy effect but that didn't quite look right either. So in the end I did the best I could with rows of individual spikes. Yes this is a bit tedious, but quite relaxing once I was in the rhythm. 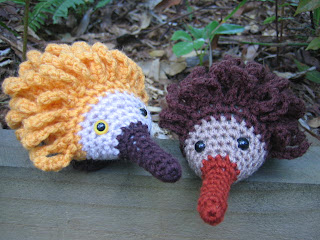 Echidnas by their nature aren't very colourful critters. Their whole goal in life is to not get noticed. The one that looks the best in the real is the dark brown and variegated. These are always a bit of a pain to count stitches on and photograph so I ended up doing a goldy yellow echidna as well.

I do like these guys. I think of all my stuffed Aussie Animals these are my favourites. Probably because the Koalas and Kangaroos, and platypus are a bit better known around the world, there are a few patterns for these about. Although they are of varying quality, they do exist.
The echidna, also called the spiny ant-eater, is one of the most primitive orders of mammals, a monotreme. They are closely related to the platypus and are egg-laying mammals. They lay only one egg at a time hatch is incubated is incubated in the pouch. 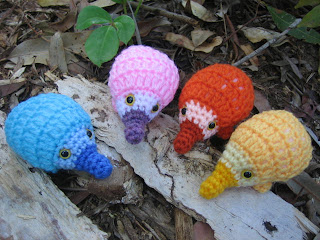 Baby echidnas are called puggles and once hatched, they remains in the pouch until its spines appear. It makes good sense because as a Mum, I don't think I would want a prickly little fellow in my pouch for long! The ones above I have named Blue, Elizabeth, Rusty and Shazza.
Their main food is ants. The echidna's snout is between 7 and 8 cm long, and is quite stiff. This enables them to break up the termite mounds and logs. 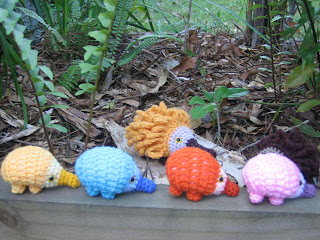 They have a long sticky tongue to lick up insects.
They look like a hedgehog or porcupine but are not related. Their backs and sides are covered with spines and coarse hair and they can roll themselves into a ball when in danger. While they look pretty tough, they are quite shy. They also have the claim to fame being of being featured on the Australian five cent piece.

Having seen the echidna in the wild, they are quite fascinating. You have to wonder what nature was thinking. 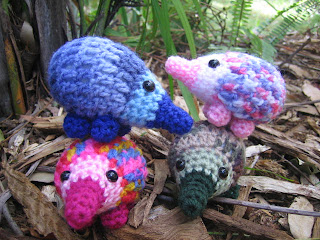 These ones I used variegated yarn for a different effect. This is Dave, Muriel, Digger and Lucy doing a bit of bush calisthenics. Of course once their spines devloped they wont be ablt to do that!

I believe the term puggles originally was associated with the echidna, however at times it is incorrectly used for platypus young as well. The same way the koala is incorrectly called a bear. There is no such thing as a platypus puggle, or a koala bear. I like to research the animals I am designing, and the misuse of these terms annoy me. (lol) I must be getting old!
The baby echidnas are a lot of fun to make and play with. I have made a few over the long weekend. The one below I thought I would try to felt to make a bag pull. I attached some yarn to his beak. He sort of felted, but not quite. 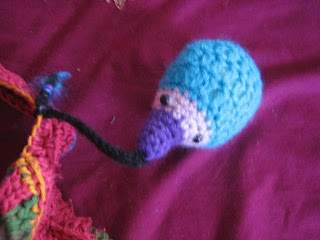 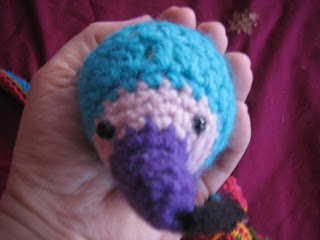 These are nice and tactile and they just fit in the hand. I might try felting another one as I think they would be good on keys and bags.

The indigenous people have some interesting myths about the echidna. One story is that a group of young men where hunting and stumbled on a wombat. They threw spears at the wombat, and it became the echidna.
Thanks for looking, and have a safe and happy Easter.

These are some cute little creatures. I would love to meet one... they sound so fun! And Happy Easter a day late!

I am learning more every time I visit your blog. They are adorable (in crochet, anyway-- I've never seen or even heard of them in real life.) Very cute. :)

Awww they are so cute... I never heard of them until now... thanks for the info. Also Thanks for posting on my Bikini Set on Crochetville.

Came across your blog while Googling for instructions on how to do a particular stitch. Didn't find the answer here, but loved your colorful creations. How beautiful! Glad I got to see them.

these are adorable! and thanks so much for the pear pattern, I've been looking everywhere for one to hang from my rearview mirror. :)

OMG! That is so cute! You've put a smile on my face.