UFOs and the Anniversary Road Trip 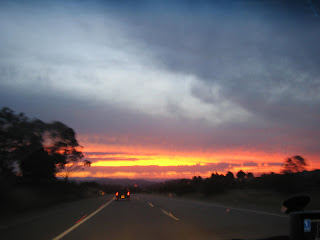 Sunset on the road to Canberra

It seems I haven’t blogged in ages. It isn’t that I don’t have anything interesting to talk about: quite the opposite. Life has been filled to the brim with our youngest celebrating his 18th in October. we also finally put in a new kitchen as the previous one celebrated its 20th birthday, and in much a shabbier state than our son!

This month my husband and I celebrate 30 years of marriage. To mark the occaision we decided (or rather I insisted) we go on a kid less trip. This is the first holiday we have had on our own since BC (before children). When he asked me where I wanted to go I said there were two places that I thought would be lovely for an anniversary trip. The first was Niagara Falls. I have seen so many photos of Niagara Falls, and the movies portray it as a honeymoon sort of place. The second place I have long wanted to see was to travel the Great Ocean Road, at the bottom of Australia and to see what remains of the 12 apostles. I believe a few of them have fallen into the sea due to erosion and I would love to see as many of them while they still remain. So hub, ever the imaginative one says "great – let’s do the Great Ocean Road! Furthermore, let’s drive all the way and stop at a few places along the way. " 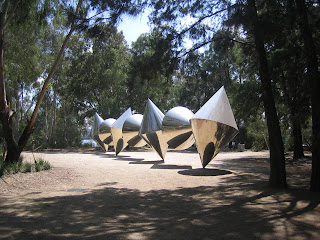 Sculpture in the Gardens in Canberra

Now for those unaware of the distance the Great Ocean Road is approx 1900k (1,100 miles) from our home on the Gold Coast. This is a very long drive. And we will need to drive back. After 30 years what can we possibly talk about for such a long drive?

Hub has his podcasts of philosophy bites, and an iPod full of his choice of music. This includes Christmas carols, which the man listens to all year just because they make him feel good, Eva Piaf, and some ABC down loads. My only solution is to crochet the miles away. So in a moment of panic, at the thought of all those kilometres of road kill, Eva Piaf and Philosophy I decide to take as many UFOs with me to see how many I can finish. Seems like a clever plan to me. 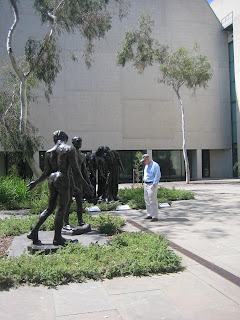 We reached Canberra on Thursday night, and it was a mere 38 degrees Celsius (100 F) and we headed off to the National Gallery. Canberra is our Nations capital, and because I had a hook and yarn in my hand, I didn't take too many photos!I didn't realise how many famous pieces we have here in Australia and I stood in front of Monet's Water Lilies for some time in awe. The man of course, reckons he could paint that if he tried. Truth is he has been flat out trying to paint the decking.. he has been working up to it for a few years now. In the photo above he is checking out the bronzes by Rodin in the sculpture garden. I am not sure why I thought finishing the green wrap in mohair and wool was such a good idea. But I did finish it. I crocheted 8 blocks from the Gold Coast to Canberra (1, 105 klms), and did the edge from Canberra to Thredbo. I used a block called a snowflake motif which I found in one of those weekly binder jobs. 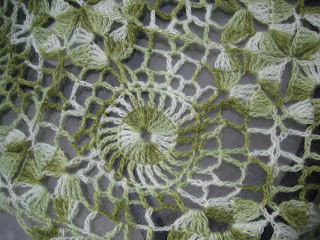 This I discovered at my Lifeline charity store. The yarn you might recognise from one of the prayer shawls I made for a friend in the last post. I did however, start my wrap over a year ago. As I enthusiastically bought a dozen balls of the yarn and I have now managed to get 2 shawls. If I had planned ahead I would have brought some charms with me to finish it off. In Cooma I discovered one of the best craft stalls I have been in for some time. I did purchase some little charms but the holes are too small to thread onto the yarn. 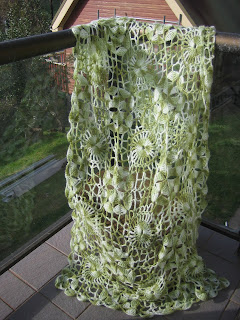 My crocheting was interrupted as we stopped to let an echidna cross the road just inside the Kosciuszko National Park. By the time I had put the hook and yarn down, and dug around for my camera the little guy was burying his way into the side of the road. I have never seen this before in my life and if you check out the video clip you can just seem the echidna as he digs himself into the ground.

ECHIDNA on the road to Thredbo

I did manage to get the shawl finished and here it is, draped over the balcony at Thredbo where we will stay for the weekend. 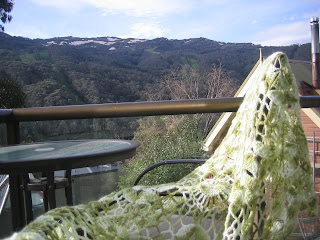 Thredbo is a Ski resort in the winter, and extremely pretty and quiet in Summer. You can see the remnants of the snow in the photo. This is one of the few places in Australia cold enough and high enough for skiing. I am sure it is nothing on Aspen, but it is a nice destination. 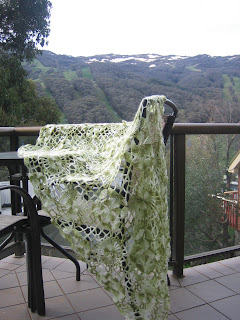 My plan is to use the wrap when we reach Melbourne as we have a dinner to attend. Thredbo is beautiful in Summer. We will do a few bush walks while we are here in Thredbo, and then we head further south to Melbourne. Given the heat, I am thinking I might work on some smaller projects for the next leg of the journey.

Posted by crochetroo at Saturday, November 14, 2009

Enjoy reading your blog. The craft stall you mentioned in Cooma - was it Past Times or is there another one I don't know about ? I'm from Canberra - glad you enjoyed your quick visit.

Happy Anniversary and welcome back! I love the crochet and the glimpses of Australia in your blog.

Congratulations on your beautiful anniversary!!!

Happy 30 Year Anniversary, it looks like you had a wonderful getaway. We have another two & a half months til our oldest is 18; 11 years til our youngest is.. ;)

The shawl is lovely, too.

Many compliments for your blog and for your wonderful crochet works!
I'm from Italy and I like your country so much. I'll come back to see your blog.

The green shawl is stunning ! Where did you find the pattern? I am a new blogger and am not sure if it is OK to ask for patterns.... let me know

What a wonderful trip and beautiful crochet!

I love your shawl, everything about it, especially the colour of it. You have inspired me to have a go at making a shawl for my mum.

This shawl is amazing! I would love to be able to make one for myself! Is this your personal pattern or one you would be willing to share?? :)

I have spent all morning reading your blog - I Love it & thank you for all the free patterns. You are a very gifted and talented lady. I think it's great that you put the information about the animals, ect. that you crochet!

Awwwwwwww i love this wrap. You're so talented. Thank you for sharing!